Taking a break on a high note...

Well, there's all kinds of good news this week -- Prof. Curtis Keyes with the adjuncts at EWU reports that he and his colleagues have gained the victory they so richly deserve! The illegality of their abrupt firing at a time when they were petitioning to organize a union was upheld by the U.S. Labor Dept. and the EWU administration has agreed to reinstate them, compensate those who lost classes mid-semester and has agreed to bargain with them in what all hope will be good faith.

On another note, the non-tenured faculty at Michigan's CMU won yet another major victory -- they voted overwhelmingly in support of forming a union! So, it's on to the bargaining table for them!

Congratulations to all; both victories are so well-deserved, and a great sign for adjunct unionization efforts across the board.

On that cheerful note, "The Adjunct Voice" is going on indefinite hiatus. Between four Comp classes and two writing projects with deadlines looming, I find I have to get realistic. Union or no union, I haven't found a way to grade multiple drafts of 4+ papers per semester for 80 students without putting in monstrously long hours. Anyone have any ideas?

If you've been following my efforts here, thanks! I would especially like to thank Vanessa Vaile for spreading the messages I've posted here to NFM's larger network and beyond. It's been an incredible summer for adjunct faculty issues, and I'm so happy to have good news to relate on my way out the (virtual) door!

Last one out turn out the lights!!
Posted by Raye Robertson at 5:32 PM 4 comments:

The United Adjunct Faculty Association (UAFA) at East-West University Rush Hour Picket Protest Thursday, July 22 at 4-6PM at 816 South Michigan Avenue Adjunct faculty members at East-West University will picket the university’s main entrance at 816 S. Michigan Ave on Thursday, July 22 at 4-6PM. Join the UAFA in its protest against the discriminatory firing of adjunct faculty as they were scheduled to vote for labor union representation with the Illinois Education Association chapter of the National Education Association. This direct attack on adjunct faculty members (the largest workforce) at EWU is extreme and strikes a mighty blow against students! It is an outrageous violation of our country’s long-standing labor laws. It is also grossly offensive to experienced adjunct professors who have worked for many years educating students and helping East-West University grow into a respected member of Chicago’s higher education community. Please help us fight against East-West University administration’s anti-union activities.

This just in...Prof. Curtis Keyes of UAFA (union the illegally-fired adjuncts of EWU are trying to form) writes the following:

Just when you think Chancellor Khan and Provost Jain would want less negative publicity of their arbitrary-discriminatory labor practices and fear-mongering treatment of adjunct faculty, they continue to fight against the adjunct faculty. Currently, Khan and Jain are working to deny/prolong adjuncts UC claims. Many of the union supporter adjuncts who were told not to come back in the fall coupled with adjuncts whose summer class assignments were abrogated and given to newly hired adjuncts in their place are meeting fierce opposition from Khan and Jain. The UC office and EWU will have a conference call with unemployed adjuncts before claims are received. EWU maintains that unemployed adjuncts are still part of personnel, so therefore, they are employees. Is this a set up to deny UC? "You betcha," as Sarah Palin would say. This email is being copied to others outside of EWU who have experience with getting through administrative schemes aimed at denying UC. How best can EWU adjuncts fight to get their UC? The battle at EWU is financially difficult for adjuncts to say the least. We need help right now!

The United Adjunct Faculty Association (UAFA) at EWU members will not be deterred. We are doing the right thing in organizing.

This is a classic reason why EWU adjuncts need union representation. There are EWU adjuncts who have worked for the institution since the late 1980s and onward with no job security or protection. The firing of all adjuncts and rehiring them at the personal discretion of the chancellor and provost during the same time UAFA was set to vote for union representation is ethically and fundamentally wrong!!!! It smacks boldly against our nation's long standing labor laws. Make no mistake, EWU adjuncts' fight is a fight that will have nationwide precedence. We will see you at the picket demonstration on Tuesday, July 13th 11-1PM at 816 S. Michigan, Chicago, Illinois 60605

An injury to our EWU colleagues could truly be an injury to all! Please pass the word along!
Posted by Raye Robertson at 3:27 PM No comments:

The adjunct faculty of East-West University in Chicago received notice on May 25, 2010 that they should "no longer consider themselves employed," one day after they had filed a petition for NEA/IEA union representation. This illegal firing must not be allowed to stand, as it threatens the right of all adjuncts to exercise their legal rights to organize in unions and collectively bargain.

The illegally-fired adjunct faculty of East-West University in Chicago need our support on Tuesday, July 13th, as they picket against the unfair labor actions of EWU Chancellor Khan and Provost Jain.

If you can't be there, please call by phone or send emails in protest of these actions to:

Professor Curtis Keyes is the main contact with the EWU united adjuncts; please cc any email protests to: EWUAdjuncts@gmail.com
Posted by Raye Robertson at 7:54 AM No comments:

UTF Solidary Forever! (to the tune of "Mine eyes have seen the glory of...")

Thanks to Erin Fox, CMU Art/Theater Dept. for the following adaptation of a traditional labor song. We sounded wonderful singing it together today!


Solidarity forever!
Solidarity forever!
Solidarity forever!
For we make CMU strong!
We're your teachers, we're your mentors, we assign the grades you earn!
The right to form a union is our number one concern!
Hopes for a better future will be realized when we learn
That we make CMU strong!
With the union's inspiration we'll negotiate health care
Not to mention job security and wages that are fair!
Which is why we're rallying here today to stand up and declare
The we make CMU strong!
We're so pleased that part-time faculty now have the right to vote!
President Ross and trustee members finally listened and took note!
They realized that temp faculty keep CMU afloat!
For we make CMU strong!
[reprise]
Don't miss this one!...a rousing chorus of "Part Time Worker" (to the tune of "Part Time Lover")...courtesy of AFT-MI Organizer (and beloved Motown Diva) Lynn Marie Smith! http://www.youtube.com/watch?v=2d_Ourmq0J4
Here's more coverage of CMU's big day! http://www.facebook.com/pages/The-Union-of-Teaching-Faculty/115082651853728
Sing On, Everyone!
Posted by Raye Robertson at 3:49 PM No comments:

What a great rally, everyone! The show of solidarity in Mt. Pleasant today was wonderful -- we're so happy for you all!
June 30, 2010
[pictures & video at http://bit.ly/ausSDg]

MOUNT PLEASANT, MICH.—Following four months of negotiations, Central Michigan University and the American Federation of Teachers have agreed on which nontenure-track faculty members will be recognized as members of a potential new bargaining unit. The adjunct faculty and their supporters, who had planned a protest rally for today, will still hold a rally at 11 o’clock this morning near the library on the Mount Pleasant campus to celebrate the agreement.

Under the agreement, nontenure-track faculty who teach quarter time or more, with some exceptions, are eligible for representation.

“The process that resulted in this agreement took time, as the administration and the union gathered all of the information necessary to craft an agreement that both parties found acceptable,” said AFT Michigan President David Hecker. “What counts is that we were able to reach this agreement. We look forward to a successful election and to joining with the administration to further enhance this great university.”

CMU was notified in early March by the Michigan Employment Relations Commission that nontenure-track faculty had filed for union certification.

“We are ecstatic about the opportunity to vote for union representation, and we look forward to a collaborative relationship with President Ross and the CMU administration,” said Mary Ann Freling, an adjunct professor who has worked for two decades in the English department.

Ray Christie, vice provost for academic administration, said: “Central Michigan University has a long-standing and well-established positive relationship with collective bargaining units, and values the dedication, contributions and commitment of our faculty and staff toward the success of our students.”

CMU adjuncts get an agreement!


I am very pleased to inform you that an election agreement for non
tenured-track faculty at CMU has been reached! We have a signed agreement
on definition of unit and timing and type of election at CMU.

As a result of this wonderful news, we will no longer be demonstrating in
Grand Rapids on Wednesday. Thank you all for your commitment, without the
threat of your action this agreement may not have been possible!

Details will be forwarded as they are made available.

Apparently, a celebration is now planned in place of protests in Mt. Pleasant (main campus), too! Congratulations, CMU-UFT!!
Posted by Raye Robertson at 4:59 PM No comments: 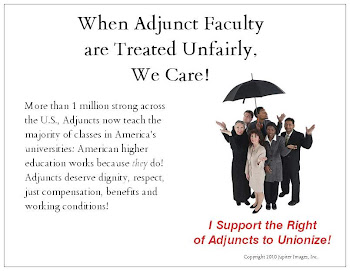 Postcards are still available for any events happening this summer!

Let's apply some pressure to EWU for illegally firing its adjunct staff!

Folks, we're hoping the AFT Convention will allow and pass a resolution censuring EWU for illegally firing its adjuncts when they tried to unionize recently. To lend your support, please click on the "Tweet" below and sign Vanessa's (New Faculty Majority) petition. 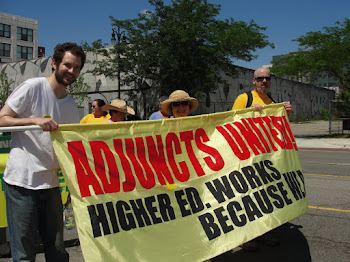 Higher Ed Works Because We Do! (pic copyright Bryan Pfeifer) 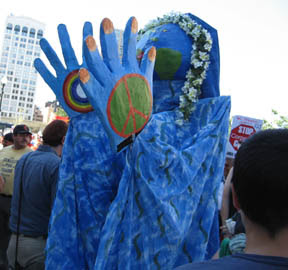 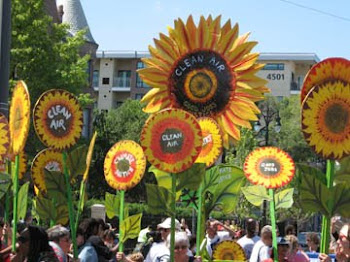 One of many incredible sights on the March! 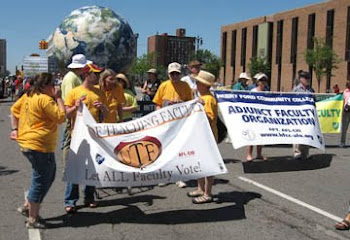 It was hot and windy, but we marched!

Who is this weary traveler, really? Share your story at adjunctvoice@gmail.com!

"Adjunct is a euphemism for 'academic temp;' by and large we are treated as lepers by the full-time faculty and staff, despite being the cheap labor backbone which props up their salaries and benefits."

"I am now making about as much as I made as a full time barista, except that I no longer have health insurance. I think the conditions under which I must work are having a negative impact on the attention I am able to give to my students."

"Adjuncts need Union representation (I say this as an ex-business exec!)."

"It would be nice if we could have a say in the days and times at which our courses are taught. Also, to receive some feedback from our department heads....either based on our SET scores or from a personal observation."

Adjuncts are having their say! Check these out...

How satisfied are you with the pay rate you are paid per credit hour of teaching?